We have recently completed a number of stormwater improvement projects in the Kansas City metro area. Three, in particular, had very similar design features. Today, we’re sharing a quick overview of each project, along with a chart comparing characteristics of each. Located on a tributary in the Dykes Branch watershed, this project involved an existing waterway that was over 1,700 linear feet. It had a concrete, trapezoidal channel with double cell reinforced concrete boxes (RCBs). To reduce the potential for flooding, we used a rectangular channel instead of trapezoidal. We also replaced the existing RCBs with larger double cell, 8×5-foot RCBs. To maintain the current channel’s flowline and provide adequate capacity, the roadway profiles were also raised. Meyer Creek Drainage Improvements
Affinis designed improvements to Meyer Creek to prevent flooding and erosion of the existing properties. Along with channel improvements, additional curb inlets and storm sewers were added within the Meyer’s Estate subdivision to alleviate local drainage issues caused by an inadequate storm sewer system. We used RCB to increase the conveyance and protect adjacent homes and roadways from flooding. We also lowered the channel flowline at the crossing to provide flood protection to adjacent properties. Sanitary sewer relocation was a key component to the design and project success, as it maximized the capacity of the channel improvements. We worked closely with Johnson County Wastewater and the city to create a functional design that met everyone’s needs. Shawnee Creek Drainage Improvements
When the area was originally developed several decades ago, the stream was channelized, and homes were built adjacent to it. Over time, the stream was impaired between road crossings, and bank failures threatened existing utilities, houses, and vegetation. As the area upstream became more developed, the channel responded by incising and widening to its current plan and profile. To stabilize the stream bank, our team used riprap or segmental block retaining walls at various locations. We also replaced three culverts with bridges to increase the conveyance and widened and extended a stretch of existing concrete channel further upstream to provide flood protection to an adjacent apartment complex. 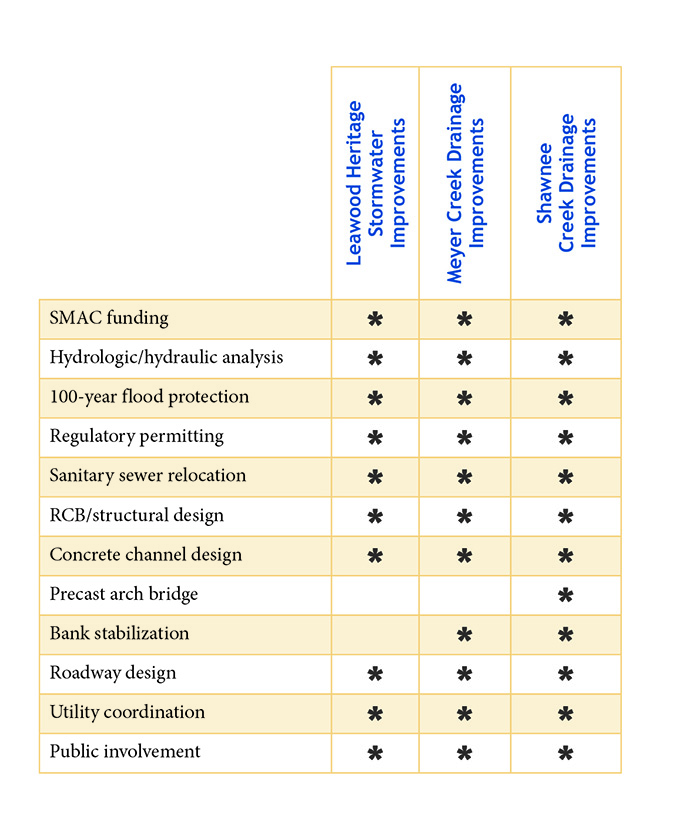