Posted on Wednesday, July 22nd, 2020 by Chris Farney
In Transportation Engineering, tagged in 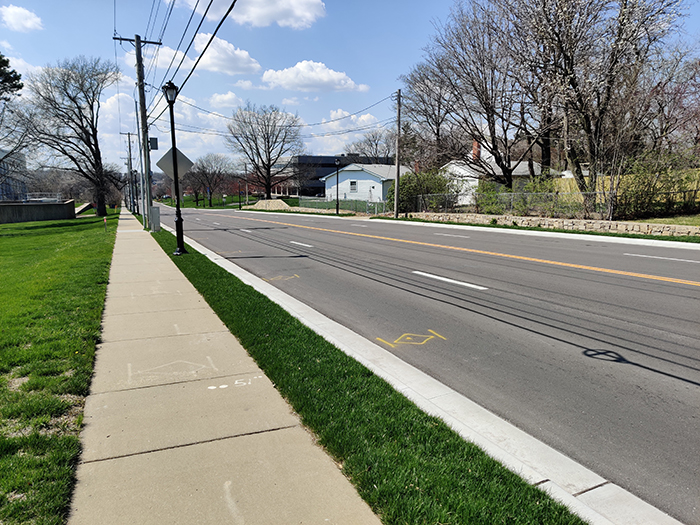 The pavement on 67th Street between Antioch and the Shawnee/Merriam border was in poor condition. The City of Merriam knew it needed to be repaired and saw an opportunity to increase safety for all users. To achieve their goals, they used a number of design strategies, including providing better access to local trails and businesses, improving entrances, and upgrading crosswalks.

The primary objective for this effort was to repair the road and add new curb and sidewalk. Because of the street’s location, the solution was not the same for the entire roadway. Most of 67th Street is asphalt. However, the areas near I-35 are concrete. For the asphalt sections, we performed a mill and overlay, while the concrete segments required portions of full depth reconstruction. By only reconstructing the areas that needed it, we created a cost-effective solution for the city. Providing safer access to a nearby trail was an important component of the project. Prior to construction, it was only accessible from the south. Those coming from the north had to cross busy, 67th Street. The city decided to add a pedestrian bridge over Turkey Creek and complete the sidewalk on the north side, creating a continuous path. With the changes, residents can now cross the creek and continue towards the trail safely. We also made safety improvements to several areas within the project site. We added a warning signal to the pedestrian crossing light in front of the Merriam Public Works Building to make it safer for those crossing 67th Street on the trail. It indicates that no left turns are permitted when someone is crossing. Before the improvement, drivers had difficulty seeing when the flashing pedestrian crossing light was activated. Drivers could turn left without knowing a pedestrian was crossing 67th. In addition, we improved an entrance to a local neighborhood, West Vernon Place. The triangular shape of the median caused issues and confusion for drivers, so we removed it and replaced it with a traditional intersection.

While safety was a primary concern, the city also wanted to minimize disruptions to local residents. We helped review the plan to keep lanes open while any concrete work was being done. The contractor would submit a plan for the traffic control, and we would review it to make certain it was safe for the drivers and provided the least amount of interruption to the traveling public. Smooth roadways, new pavement markings, and modern lighting are just a few of the changes drivers and pedestrians can see on 67th Street. While these infrastructure improvements boost curb appeal for the area, the new safety features will have a positive impact on residents for years to come.