Posted on Wednesday, January 25th, 2023 by Mark Hoppe
In Structural, tagged in 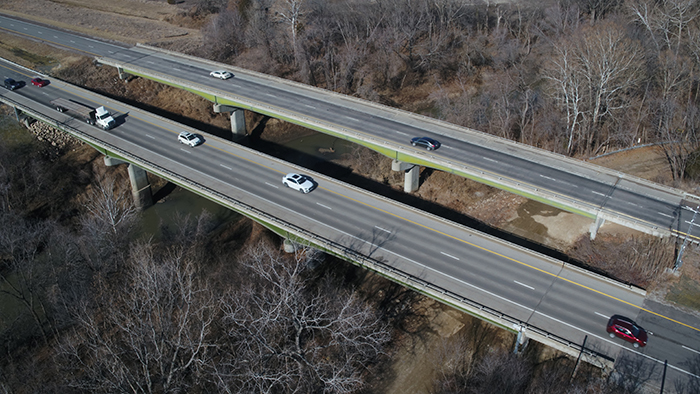 The Kansas Department of Transportation (KDOT) has a program which sets aside money every year for bridge repairs. They knew the 50-year-old bridge over the Wakarusa River on K-10 needed to be repaired. This busy roadway serves the growing communities of Lawrence, DeSoto, and southern Johnson County.

KDOT selected Affinis for the K-10 Set Aside Bridge Repair project. We started by conducting a deck investigation to find the amount of delamination to determine the deck condition. This process helped us quantify the amount of patching needed.

After performing this site check, we designed the improvements and prepared the plans. The structure needed deck repairs, overlay, joint replacements, pier repairs, bearing devices reset, removal of lead paint, and painting. The joints at piers one and four were leaking water. To combat this, concrete surface repairs were made to the pier cap at one and four, and column repairs were performed at pier four.

Due to the high volume of traffic in the area, construction was phased. We kept one half of the bridge open at all times to keep traffic moving. We started on the right and then, moved to the left side. Prior to the first phase, we also performed shoulder repairs, so we could shift traffic appropriately.

The bearing devices were tipped, and the girders were against the backwall. During construction, the bearings were reset, girder ends trimmed, and the joints were installed. The pier concrete was repaired. The deck was patched, and then, a multi-layer polymer overlay was placed. In addition, the lead paint was removed, and new paint was applied.

We reviewed the contractor’s shoring submittal for resetting the bearing devices. As parts were fabricated, we reviewed and approved the shop drawings. We did this for the strip seal assemblies. We also performed the same service for bridge drains, which carry water away from the pier joints.

Along with preparing the initial plans, our team also worked with the construction team to make changes on-site. After the plans were complete, the bridge continued to deteriorate further. In fact, the armory of the aging bridge failed prior to construction. We worked with the contractor to perform a modified joint replacement at pier four. We needed to make field modifications, so the solution would work properly within the site’s current condition. The completed project allows KDOT to extend the service life of this bridge another 20 to 40 years. Tackling maintenance concerns now increases safety and allows them to focus future funds towards the expansion of K-10. This approach connects to neighboring communities’ long-term plans for this busy highway.